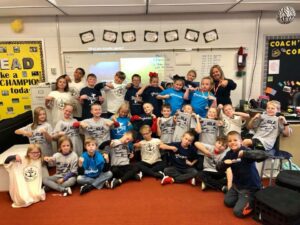 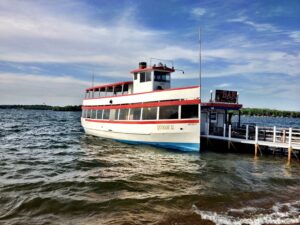 Iowa Great Lakes Association Environmental Update Spring 2017 Zebra Mussels Zebra mussel populations continue to expand in the Iowa Great Lakes. The populations is expected to continue to increase in the coming years before reaching a limit and moderating. The biggest impact to lakeshore residents continues to be colonization on hoists, docks and swim ladders. … Read more 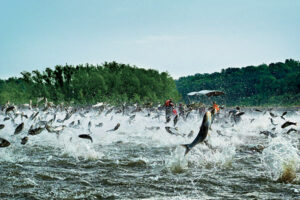 The electric fish barrier located at Lower Gar near Milford has prevented Asian Carp from entering our chain of lakes. This invasive species have spread through flooding and other means throughout the years, and pose a definite threat to not only our ecosystem, yet to water recreation due to their ability to jump out of the water. Iowa Great lakes Association’s Bill Van Orsdel & Phil Petersen present an example of the Big Head Carp to Mike Hawkins – DNR Spirit Lake Biologist – commemorating the successful installation of the Lower Gar $1,000,000 Electric Fish Barrier which has prevented any further infestation of the Asian Carp including the Jumping Carp. There have … Read more IOWA FISHERIES BIOLOGIST RECOGNIZED BY PEERS FOR EXCELLENCE IN THE FIELD Iowa fisheries biologist Mike Hawkins has been awarded the Fisheries Biologist of the Year by the Midwest Association of Fish and Wildlife Agencies for his work in lake restoration, watershed management and his leadership in getting the electric fish barrier placed at the outlet … Read more Introductory Notes: Many people have asked the question why wasn’t the electric fish barrier turned on? The reason is there is only a few inches of water on the deck right now and with the electricity turned on the fish are immobilized and can’t get off the wide deck and they die there. Then we have … Read more

EXPLORE OKOBOJI – APRIL 11,2013 The discovery of zebra mussels in some of the Iowa Great Lakes is changing how the Iowa Department of Natural Resources conducts its annual gillnetting operations. Kim Bogenschutz coordinates the aquatic invasive species program for the DNR…(click here for comment.) “We still don’t know how many are in the chain of … Read more 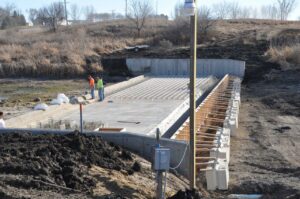 Posted: 02/26/2013 SPIRIT LAKE, Iowa – The electric fish barrier that will keep Asian carp from entering the Iowa Great Lakes through the Lower Gar Lake outlet is in place and operational. All that remains to be completed for the nearly $1 million project is final site restoration. Mike Hawkins, fisheries biologist with the Iowa … Read more The Iowa Department of Natural Resources has found a small number of additional zebra mussels in the Iowa Great Lakes. The DNR released a press release this week about the discovery.