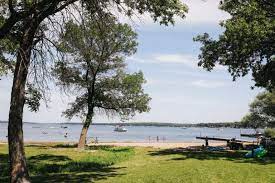 Spirit Lake, IA (KICD 107.7 Radio)– A public beach in the Iowa Great Lakes has a swimming advisory headed into the last weekend before labor Day. The Iowa DNR does periodic tests at public beaches, and the last test on Wednesday indicates a higher than normal level of E Coli bacteria at Emerson Bay on the Southwest corner of West Okoboji. The other three beaches on West lake – Gull Point, Pike’s Point, and Triboji – all tested normal.

Earlier this week the Department of Natural Resources had issued a warning to swimmers and their animals at Crandall’s Beach on the Northwest corner of Big Spirit Lake, where state lake and beach monitoring coordinator Daniel Kendall said the E Coli level was – in his words – “Off the Chart.” The test Wednesday indicated those levels came down.

Fisheries Biologist Mike Hawkins says the toxin level on Big Spirit tested high this week as algae is starting to die off at the end of the summer, but the most recent test shows that level is safe again too. Hawkins says algae is present in most Iowa lakes, but is only monitored by the state where there are public beaches.