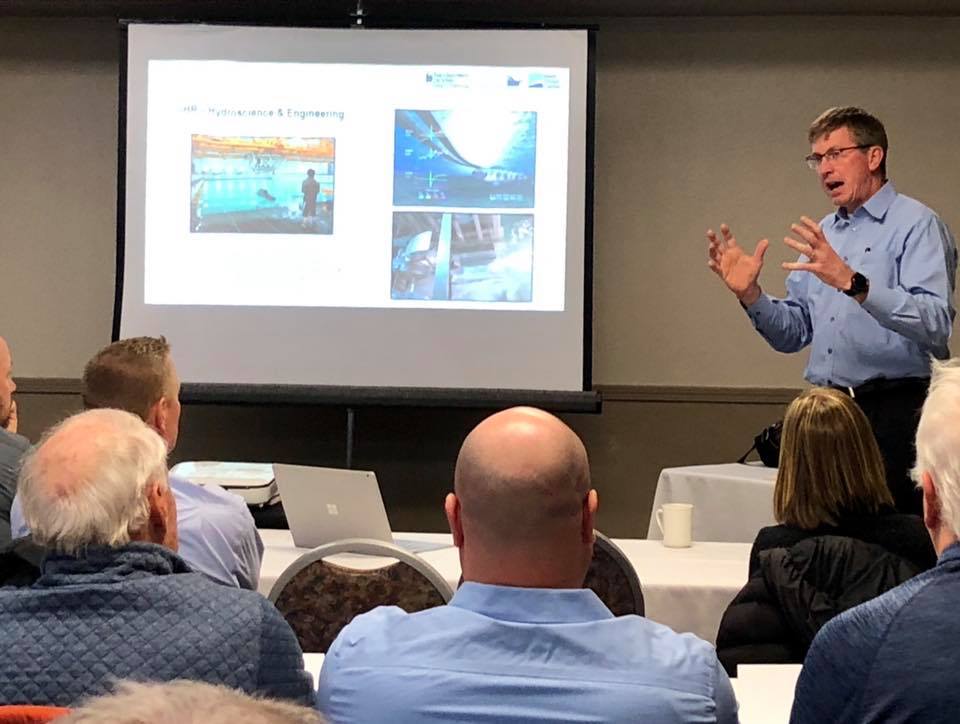 The waters of the Iowa Great Lakes may be frozen now, but they were high enough to all but halt boat traffic five months ago. And while wave and erosion control are on the back burner this winter, the Iowa Great Lakes Association is taking the first steps to get a scientific handle on the local water system. The nonprofit invited local government officials and environmental figures to the Arrowwood Resort and Conference Center in Okoboji Wednesday to hear from a group of experts at the University of Iowa.

“We thought that we needed to bring in an expert to explain exactly how the watershed drains into the lake and into Lower Gar,” IGLA President Bill Van Orsdel said. “The Corp of Engineers did it in ’97, which was four years after the ’93 flood. I didn’t think we wanted to wait another four years for a study.”

Van Orsdel reached out to the University of Iowa and was put in contact with Dr. Larry Weber of the university’s hydroscience and engineering department. Weber and his colleagues, Dr. Macela Politano and Dr. Nate Young, are using an mathematical model developed for understanding watersheds statewide. Weber told the group Wednesday some 951 presidential disaster declarations have been made in Iowa due to flooding in the last 30 years, with some counties tallying more than 20 declarations.

“The purpose of the study was really in recognition that we’re having these flooding events,” Weber said. “Folks up here saw another major event this year. With the major historical events that have happened before, it’s clear that we can’t just continue to go on this way. The purpose of the study was to bring an independent, scientific and engineering resource to the area to evaluate it.”

The group’s findings are still in their preliminary stages, but Weber and Young said the team will run several simulations based on the data collected and make recommendations in the coming year.

“We really do think we’ll have the model calibrated in early January,” Weber said. “We’ll go through that scenario-development work and probably be back up here Feb. 1 to present that, get feedback on it, use that feedback, then maybe do another simulation or two and then write that up in a draft report by April 1 or so.”

Weber stressed the group will not endorse a particular course of action but will explain several options in its report.

“Those recommendations are going to have to be endorsed by the board of supervisors and the city of Milford,” Van Orsdel said. “Once that’s endorsed, we’ll take it to the legislature. If we get that far, I’m pretty convinced that, with our ability to lobby, the legislators will get everything we need approved.”

Weber and his team studied a 540-square mile area, stretching into southwest Minnesota. Weber said, in his opinion, the mathematical model developed by Politano is one of the most sophisticated in the world. The model factored for soil conditions, rainfall, evaporation rates and a number of other aspects in the watershed. The study area was divided into 14,000 triangular sections ranging from 80 to 100 acres each.

Weber said the Lakes Area has definitely been experiencing more intense rainfalls recently. He said their data showed 15.5 inches of rain fell over an extended period between June and July of 1993 — the year of one of the Lakes Area’s most notable flooding events. However, the high waters which stunted summer boat traffic this year came about with only 9.5 inches of rain. Weber indicated the swollen shores may compound heavy rains after the thaw.

“Going into the winter right now, the lake is high,” Weber said. “The lake’s not going to drop much over the winter season. It’s probably going to go into the spring with a high lake level. So, that should have folks’ attention.”

Specifically, the team will be examining what changes to the Lower Gar Lake outlet, if any, will be most effective for flood management. The outlet passes under a road via several culverts. The county and the city of Milford share ownership of the road. Young said eight elliptical culverts were in place before 1993, and an additional 12-by-5 foot box culvert was added after that year’s flood. In 2010, two 14-by-4 foot box culverts were added at a higher elevation, out of concern too much water would be released from Lower Gar, according to Young. If the roadway were to be completely removed, Young said preliminary results show the water level in the area upstream would drop 2 feet in high flood conditions, but minimal change would be seen in low flow conditions.

“200 feet downstream from this crossing, we’ve got a weir that’s holding the water surface at a minimum elevation,” Young said. “Those lower culverts, they’re half-full all the time. The roadway’s not really — at least at low flows — providing control. The weir is.”

“Anytime we do those studies, it’s important for us to put an eye to the future,” Weber said. “We want to make sure that whatever we do today is done with a thought toward climate and increasing rainfall intensity, because we don’t want our design to all of a sudden be outdated in a few years.”

Van Orsdel hopes, when further calculations are complete in the spring, the various government bodies of the area will come together to agree on a path forward.

Van Orsdel said the study is underwritten by the IGLA and local businessman Tom Clary for approximately $125,000. He hopes to raise funds in the community to offset the cost at a later date.

“I’m not so concerned with the money as I am with coming forward with a professional study that can’t really be questioned because of the abilities of Dr. Weber and his staff,” Van Orsdel said.