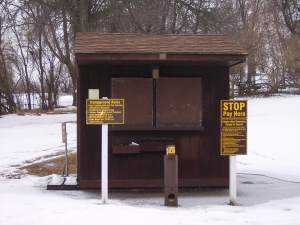 Parks personnel with the Iowa Department of Natural Resources hosted a public informational meeting Thursday evening on various improvements either currently underway or that soon will be getting started at several state parks in the Iowa Great Lakes Area. They include the removal of an existing restroom and replacing it with a new one along with the construction of a new shower building at Gull Point State Park; removal of an existing restroom building and construction of a new one at Pikes Point; and installation of interior lighting and remodeling of the existing restroom at Hattie Elston. Frank Rickerl, District Supervisor of Parks for Northwest Iowa, tells KUOO news the most significant project will be at the Marble Beach campground on Big Spirit Lake. He says that project, which will be getting underway this spring, will have a price tag of about $3.5 million.