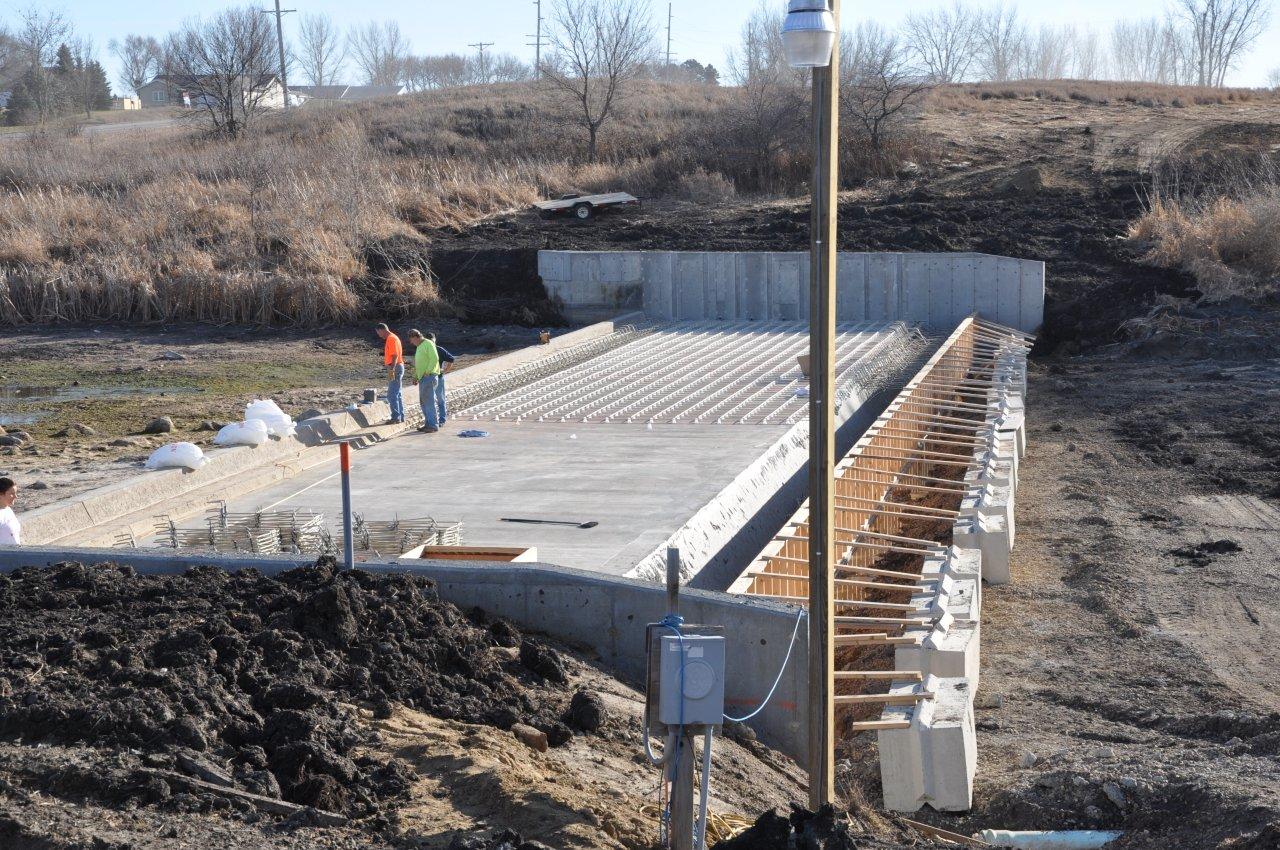 SPIRIT LAKE, Iowa – The electric fish barrier that will keep Asian carp from entering the Iowa Great Lakes through the Lower Gar Lake outlet is in place and operational. All that remains to be completed for the nearly $1 million project is final site restoration.

Mike Hawkins, fisheries biologist with the Iowa Department of Natural Resources, said if a high water threat arose, they could activate the barrier to prevent invasive fish from entering the Iowa Great Lakes from downstream.

“Invasive species seem unstoppable and are negatively impacting aquatic resources across the nation. This is an example of coming together as a community to win an important battle against them,” Hawkins said. “The electric fish barrier is currently the only effective tool to prevent upstream migration in this case.”

Electric barriers are superior to physical barriers because they do not obstruct water flow or collect debris. The system creates an electrical field in the water that prevents fish from moving past it. Most fish will avoid the electric field, but if a fish tries to swim past it, the electric field immobilizes the fish and the flowing water pushes it back downstream unharmed.

The electric fish barrier project became a priority after big head carp and silver carp were found in the lakes while sampling fish populations on three separate occasions.

The fish likely entered the chain of natural lakes during the flood of 2011 that allowed them to pass over two dams in the Little Sioux River and over the outlet dam on Lower Gar Lake at the bottom of the Iowa Great Lakes.

There was a sense of urgency locally and within the DNR to protect the lakes that are important for the area’s tourism industry and economy. The ecology and lakes are too important.

From pre-design to operational, the 10-month project was a locally driven partnership between the cities, county, lake associations, water safety council, private organizations, and the Iowa and Minnesota departments of natural resources.

The Iowa Great Lakes are fed by streams flowing from Minnesota. The Minnesota DNR contributed $261,000 to the project with funding provided by the Outdoor Heritage Fund. The fund, which receives revenue from Minnesota sales tax dollars, may only be spent to restore, protect and enhance wetlands, prairies, forest and habitat for game fish and wildlife.

“We are looking at every opportunity to protect streams and lakes in Minnesota from Asian carp,” said Steve Hirsch, director of the Ecological and Water Resources Division for the Minnesota DNR. “This collaboration with our partners in Iowa will prevent Asian carp species from moving into the southwestern part of our state.”

“This was a huge community effort to come together, raise money and get the job done,” Hawkins said. “Minnesota had an interest in the project and made a significant monetary contribution. They were a great partner.”

Now that the barrier is in place cutting off access to additional Asian carp from entering the lakes, is there an estimate of how many did get in?

“We do not have a population estimate, but we do know that these fish need large river systems to reproduce and there is no evidence that they can reproduce in a lake environment,” Hawkins said. “We believe their numbers are limited. Commercial netting and our annual sampling will give us some information on numbers.”

Big head carp and silver carp are filter feeders and not likely to be caught by hook and line.

So far, there has not been a reported boating incident with these fish in the lakes, and area leaders are confident the barrier will prevent additional unwanted guests from entering the lakes.

SIDEBAR: ASIAN CARP IN THE U.S.
Bighead and silver carp were introduced into the southeastern United States, escaped into the wild in the 1980s, and have been rapidly spreading throughout the Mississippi and Missouri River watersheds ever since.

Bighead and silver carp are filter feeders and can impact native fish species and lake ecosystems by filtering zooplankton from the water that is an important food source newly hatched fish.

Silver carp are the more known of the two species because of the videos showing them leaping out of the water.

Both species can live more than 20 years and grow to more than 100 pounds.