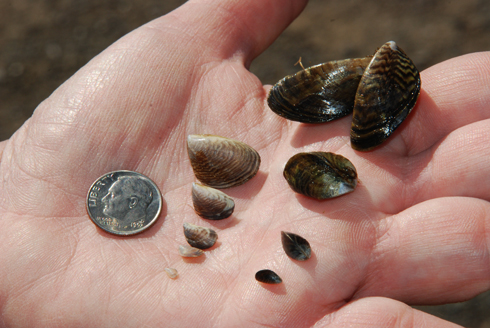 The Iowa Department of Natural Resources has found a small number of additional zebra mussels in the Iowa Great Lakes. The DNR released a press release this week about the discovery.

“This is not good news,” says Iowa Great Lakes Association president Bill Van Orsdel. “We are not sure they will reproduce, so we may will have a second chance to protect the lakes. We still need to protect our lakes from Eurasian watermilfoil, which have not been found here.”

The Iowa Great Lakes Association will continue efforts to protect the lakes – not only from additional big head carp and zebra mussels, but from further invasive species threats.

Below is the news release from the DNR:

SPIRIT LAKE, Iowa – Three additional juvenile zebra mussels were found attached to docks/hoists removed from East Okoboji Lake, increasing the likelihood that the invasive species may be establishing itself in the popular northwest Iowa chain of lakes.

Investigation of a number of docks and hoists from other lakes in the chain revealed no additional mussels. The discovery was made this December as part of the Iowa Department of Natural Resources efforts to monitor for the presence of zebra mussels on boat hoists and docks removed from the Iowa Great Lakes.

The monitoring effort was in response to finding a single zebra mussel from Upper Gar Lake in September of this year.

“Finding additional zebra mussels indicates that zebra mussels may be established in the Iowa Great Lakes,” said Kim Bogenschutz, the DNR’s aquatic invasive species program coordinator. “But it is still too early to tell if there is a reproducing population in the lakes.”

Zebra mussels are native to the Caspian Sea region of Asia and were introduced into the North American Great Lakes in the 1980s from ballast water of oceangoing ships. They have spread throughout lakes and rivers in the Midwest and around the country. Known populations within Iowa include Clear Lake, Lake Rathbun, Bluebill Lake (near Mason City), and the Mississippi and Maquoketa rivers.

“The news is discouraging, but we don’t know if there is truly an infestation yet,” said Mike Hawkins, Spirit Lake District fisheries management biologist. “We shouldn’t panic. Many other lakes are infested with zebra mussels and the impacts have been manageable.”

The impact to the Iowa Great Lakes is unclear if zebra mussels become established. Zebra mussels are filter feeders and directly compete with native species, including mussels and small fish, for food. Zebra mussels also adhere to hard objects. If densities are high enough, they can smother native mussels by attaching to their shells. Drinking water utilities and the State Fish Hatchery may also be impacted since zebra mussels could attach and grow on the inside of intake pipes, potentially clogging them.

The Iowa Great Lakes community has provided important leadership to the state of Iowa in fighting aquatic invasive species. “This strong partnership and the continuation of these efforts remains our best weapon against these invaders,” said Hawkins.