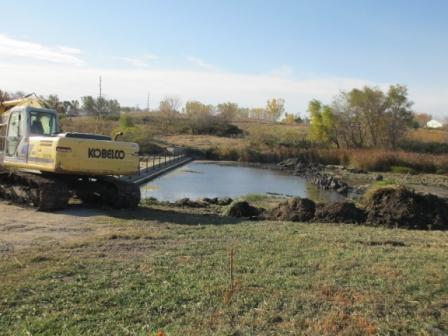 Although no dirt has moved at the site of the new electric fish barrier, it doesn’t mean that things haven’t been moving forward. An engineering firm and manufacturer of electric fish barriers, Smith- Root Inc. of Vancouver Washington, was selected on June 10th by the DNR to design and engineer abarrier capable of preventing Asian carp from entering the Iowa Great Lakes.  Smith-Root will also provide construction oversight as the project moves forward.

DNR staff from Fisheries, Sovereign Lands, and Floodplains have been working with the Smith-Rootover the past months to make sure contracting, permitting, and safety concerns are all being addressed.On August 27th, a set of final design plans were delivered to the DNR.

The electric fish barrier will be incorporated into the existing dam which is just west of 230th Ave on theoutlet of Lower Gar Lake. Both the engineering firm and the DNR believe that this location gives the lakes the best protection from Asian carp and the lowest risk of entrapment of fish that leave the lakes.Placing the barrier someplace downstream would have the effect of stockpiling fish that leave the lake, trapping between the dam and the barrier, and potentially causing a large fish kill as water levels fell inMilford Creek.   A barrier incorporated into the dam will keep fish from moving upstream but also have an added benefit of potentially keeping fish in the lake.

The existing dam will stay in place.  A 20 foot wide apron at the same elevation as the top of the dam willextend downstream. In effect, the top of the dam will be “stretched or widened” downstream. This apron slope down slightly and contain the steel electrodes that produce the electrical field.  The wing walls ofthe dam will also be raised slightly. This is to assure that even during a 500 year flood event all water iscontained within the walls and fish can’t slip by.

If anyone has an interest in seeing the engineering plans, you can stop by my office or request an electronic copy from me.

The Smith-Root hydraulic engineer and the DNR Floodplains engineer have modeled the barrier todetermine impacts to outflow volumes and efficiency.  There is virtually no hydrologic impact to the addition of the fish barrier. The model even predicts that the dam will be slightly more efficient at passingwater, but the difference is negligible.

On Sept 4th the approved plans were put out for bid for construction. Those bids were opened onTuesday. Although Smith-Root estimated construction for the barrier to cost around $627,000, the lowestbid of the three we received was for a little over $843,000.  Our DNR engineer predicted the bid pricesmay be higher than the estimate. This project isn’t your typical construction project and our short time lineadded to the price.

On Wednesday, the Natural Resources Commission met during a special meeting and voted 7-0 to approve the lowest bid.  A construction contract has been drafted and should be signed by Christianson Construction of Estherville shortly. Construction of the barrier should begin in the coming weeks andbarring unforeseen circumstances should be completed by the middle of December.

The total price tag for the project $961,621 when we add in engineering and construction oversight. I amhappy to announce that funding for the barrier has been secured.  As you know, the Iowa DNR has committed $300,000 and the local community $400,000. Over the past few months we have been working very closely with our counterparts in Minnesota.  Asian carp don’t seem to mind crossingpolitical borders and Minnesota has some significant resources at stake in the Iowa Great Lakes Watershed – Little Spirit Lake, Loon Lake, and Clear Lake.  Final approval was received on a proposal submitted to the Minnesota legislature to use Minnesota Legacy funding to assist Iowa in building the electric barrier. During a phone call on Wednesday, Minnesota committed $261,000 to the project.  We will be working on a joint news release in coming weeks to announce this partnership. I’m humbled byMinnesota’s commitment to protecting their natural resources.

There has been a great team of folks within DNR and the local community working to make sure thisproject was completed this fall.  Many many parts of this project needed to fall in place systematically. They all have and it looks like we will meet our goal.