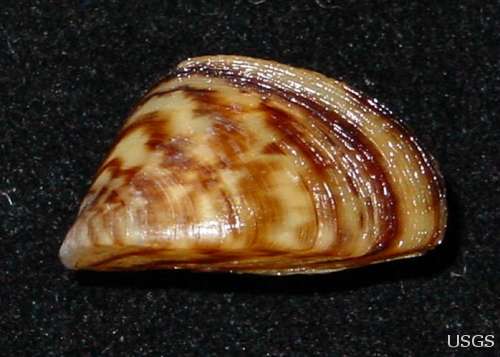 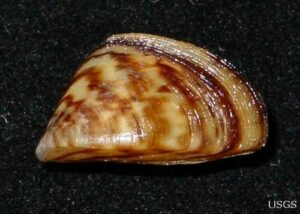 SPIRIT LAKE, Iowa – The Iowa DNR recently collected a single live juvenile zebra mussel from Upper Gar Lake on a sampling plate used to monitor for the presence or absence of zebra mussels.

No additional mussels were found on several other samplers placed throughout the Okoboji chain of lakes and no veligers were found in any of the samples.  Had they shown up, it would indicate that natural reproduction had occurred in the lakes.

“We will be doing additional monitoring in the Iowa Great Lakes but until additional zebra mussels or veligers are found, it is too soon to say that a population has become established,” said Kim Bogenschutz, aquatic invasive species program coordinator for the DNR.

Veligers are detected by analyzing water filtered from the lake.

“There is a chance that this mussel came from a veliger released into the water at a nearby boat ramp and that this introduction may not result in an infestation,” said Mike Hawkins, Spirit Lake district fisheries biologist.

The DNR will continue to aggressively monitor the lakes for the presence or absence of mussels and veligers and ask lakeshore homeowners to check their hoists and docks when removing them this fall.

“These would be likely locations where zebra mussels would attach,” Hawkins said.  The mussels are small, D-shaped clams, with stripes that attach to hard surfaces.

Zebra mussels are an aquatic invasive species that have spread throughout many lakes in the Midwest and around the country.  Known populations within Iowa include Clear Lake, Lake Rathbun, Bluebill Lake, and the Mississippi and Maquoketa rivers.

“This strong partnership and the continuation of these efforts remains our best weapon against these invaders,” said Hawkins.

“This is certainly not good news, but we should not panic either,” Hawkins said.  “First, we don’t know there is truly an infestation yet.  Secondly, many other lakes in the country are infested with zebra mussels and the impacts have been manageable.”

If infested, drinking water utilities and the State Fish Hatchery may be the most impacted since zebra mussels may attach and grow on the inside of intake pipes, potentially clogging them.  There are ways to overcome these impacts however, and many of the entities that draw water from the lakes have already been preparing for this as the spread of zebra mussels has progressed across the Midwest.

In lakes like Clear Lake, near Mason City, there have been negligible impacts to recreation and tourism, despite the presence of zebra mussels.  In fact, according to the most recent (2009-10) economic survey, completed by the ISU Center for Agricultural & Rural Development (CARD), Clear Lake was the most frequently visited natural lake within the state, followed by West Okoboji Lake.