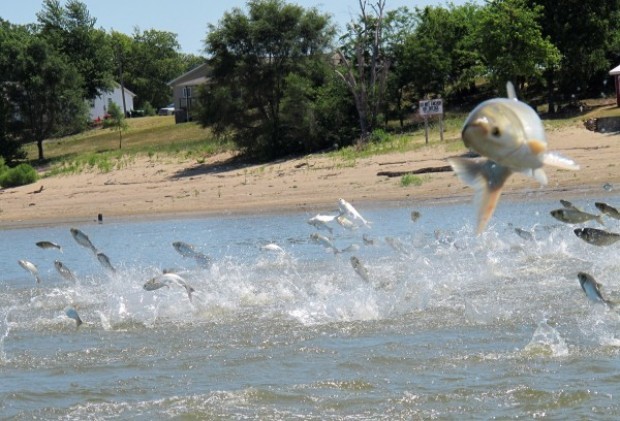 It’s not exactly Dr. Seuss’ original story line, but it is what can happen when an invasive species such as Asian carp enters a lake.

They deplete the food supply for native fish, said Karie Decker, invasive species program coordinator at the University of Nebraska-Lincoln.

They also fly out of the water into passing boats, scaring unsuspecting boaters. But their real danger is to other fish. “They simply out-compete so many species,” she said.

The federal government has spent millions of dollars trying to keep Asian carp out of the Great Lakes.

And now, Nebraska has a state law aimed at keeping bad fish like these, plus invasive mussels and plants, out of Nebraska lakes and rivers.

A public hearing on rules for the Aquatic Invasive Species Act is scheduled for 10 a.m. Friday in Broken Bow, Neb., in Custer County. The hearing is part of the Game and Parks Commission meeting.

The new law also creates an advisory council to provide a management plan and help with outreach efforts. It is the next step in Nebraska’s ongoing efforts to keep state waters free from the damage of invasive non-native species.

“We know that invasive species such as the quagga and zebra mussels have been found in reservoirs in almost every state that surround us. With many out-of-state visitors boating on our waters, it is essential that we move to stay ahead of the game by being proactive,” Schilz said about the law passed last year.

The next step is to secure funding for the necessary provisions such as inspection sites and cleaning stations, he said.

The law lists more than three dozen species, from common carp, which have been in Nebraska waters for a century, to the snakehead, which has not reached Nebraska but is considered a high threat.

But Decker and Schilz’s worst nightmare, the invasive species on most people’s minds, is the zebra mussel.

Adult mussels are notorious for sticking to and clogging pipes, filters and screens, creating problems in water outlets, in power plants and irrigation pipes, even boat engines, said Decker, who has offered workshops across the state for three years on invasive species as coordinator for the Nebraska Cooperative Fish and Wildlife Research Unit at UNL.

The larvae are microscopic, transported by unknowing boaters, sometimes in their live wells.

“You turn on the recirculation pumps, and you’ve just transported zebra mussel larvae,” said Daryl Bauer, of the Game and Parks Commission.

Nebraska already has had its first bout with zebra mussels. Two years ago, after a teenager collecting cans at Omaha’s Zorinsky Lake found a zebra mussel on a beer can, the U.S. Army Corps of Engineers drained the lake, emptying it to about 20 feet, then allowed the water to freeze to destroy the mussels.

The proposed rules spell out the boat drainage, inspection and decontamination requirements.

Refusal to allow an inspection or decontamination also is a criminal offense under the law, a Class III misdemeanor with a fine of at least $500.

The new rules also will ban felt sole waders in Nebraska streams because they hold water that can carry invasive species such as New Zealand mud snails and an invasive algae called rock snot.

The law consolidates and formalizes much of what already is in place for planning, outreach and awareness, Bauer said. “We want to make sure everyone is on the same page and we have a plan.”

Schilz had hoped to put some money behind the program with a $30 boat license for nonresident boaters and a small increase to resident boater registration, but the funding lost out to the economy and the no-tax climate. And there was debate over who should be paying — boaters, power plants or the general taxpayer, he said.

All neighboring states have similar legislation, and Wyoming, Colorado and Iowa have funding from state general funds, according to information from Schilz’s staff.