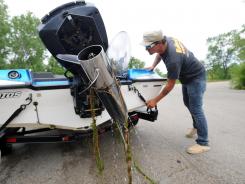 ANTIOCH, Ill. – After Brian Griffin pulls his boat out of West Loon Lake, a couple of weeds dangle from his trailer and propeller.

One is a nice surprise: white-stemmed pondweed, an endangered plant, says Michael Adam, senior biologist for Lake County. The other is a problem: Eurasian watermilfoil.

It’s an aquatic invasive species first found in North America in the 1940s. It has spread to almost every state, where it grows into thick mats that can make lakes impenetrable for boats and swimmers. Milfoil can make it impossible for native plants to grow, affecting fish and wildlife. Once it’s established, it can be managed but not eradicated.

If Griffin launched his boat in a different lake and deposited that single strand of milfoil in it, a new infestation could have been created. “Even a little piece like this can cause a whole new population,” Adam tells him.

The first aquatic invasive species in the Great Lakes was the sea lamprey in the 1830s. Now more than 180 species are in the region, and 10 more are “knocking on the door,” says David Hamilton, a senior policy director for The Nature Conservancy. Of those species, 29 are threats to the Mississippi River basin, he says. 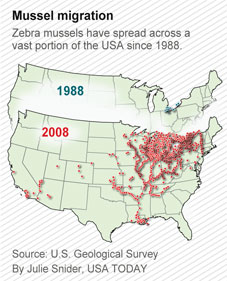 Some invasive plants were sold for use in aquariums and dumped when their owners tired of the hobby. Some are animals, such as the zebra mussel, a small mollusk that deprives native fish of food and habitat and attaches itself to dock pilings and boat hulls. The Asian carp is such a threat to the fishing industry that the Army Corps of Engineers is studying ways to build a permanent barrier to prevent it from moving into the Great Lakes.

A study conducted this year for The Nature Conservancy found that aquatic invasive species cost the Great Lakes region significantly more than $100 million a year.

“People should be concerned because it costs them money every day” in water bills and the cost of goods and services, says Rich Bowman, the group’s Great Lakes government relations director. “We need investments in screening, early detection and rapid response so we’re finding these things before they become established and we’re stuck with them forever.”

Federal law allows the Fish and Wildlife Service to bar importing and selling invasive animals, but the process can take years. Pending legislation would streamline that process. Some states have laws making it illegal to transport invasive species.

In Minnesota, violators face fines of $500 or more. After warning boaters for the past couple of years, the state is now cracking down. Through June 6, says Capt. Greg Salo of the Minnesota Department of Natural Resources enforcement division, 193 criminal and 463 civil citations were issued, and 1,242 people were warned to pull weeds from boats and trailers and empty all water from vessels and gear.

“A lot of people are angry about getting tickets,” Salo says. “The word is being spread.”

Signs often are posted near boat ramps warning of “aquatic hitchhikers,” but resort owners such as John McCabe of Birch Point Resort on Wisconsin’s Nelson Lake make it a point to discuss the danger with guests.

“It usually starts with finding out how the fishing is and inevitably they bring up the condition of the lake,” he says. “They ask if there’s evidence of milfoil, and we say that through proper cleaning we’re able to prevent it from taking over this lake.” If that changes, McCabe says, “There goes your business.”

“There are concerns that these species will alter the ecosystem in a way that will allow potentially harmful organisms to flourish,” Adam said. For example, blue-green algae, which can produce toxins, could become more common.

Homeowners and businesses located on the lakes formed a taxing district that raises $50,000 a year to maintain the lakes, says Mike Clifton, president of the Loon Lakes Management Association. Some of that money pays for a harvester, a boat that mows invasive plants around the shoreline and docks five days a week.

Adam worries that hydrilla and Brazilian elodea plants already spotted in Indiana and Wisconsin, will arrive here soon. Volunteer monitors are being trained to spot them so a rapid-response team can kill them before they spread.

“There’s no turning back the clock. That’s the unique devastation that invasive species bring,” says Joel Brammeier of the Alliance for the Great Lakes, a citizens group. “But it’s never too late to stop the next invader.”