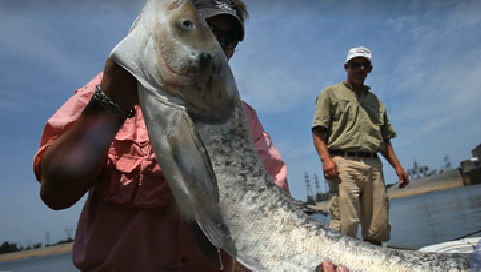 (From Explore Okoboji – March 20, 2012 – Spirit Lake)– The Dickinson county board of supervisors voted four-to-one in favor of the county contributing $50,000 toward the estimated $700,000 total cost of installing an electric fish barrier on or near the weir at the Lower Gar Outlet.

Proponents of the project say it would hopefully prevent Asian Carp, or the so-called “jumping fish”, from getting into the Iowa Great Lakes. Asked about how firm the $700,000 estimate is, Mike Hawkins, a Fisheries Biologist with the Iowa Department of Natural Resources, said there no guarantees. He says it was based on a similar barrier installed years ago near Heron Lake, Minnesota, and they had factored in the rate of inflation.

Mike May, a lakes area resort owner and former state lawmaker, said doing nothing isn’t an option if we are leave a legacy to upcoming generations.

An additional video on the Asian carp threat can be seen at this link: http://www.freep.com/article/20110721/NEWS06/110721057/Asian-carp-video-documentary-Managing-menace